For Our Client's Injuries.

Let Us Fight For You!
“Glozman pilloried prosecution witnesses”

Our Areas Of Practice!
Previous
Next

The Law Offices of Vadim A. Glozman provides equally vigorous defenses to both high-profile clients and everyday people who face federal and state criminal charges. We stand ready, willing, and able to put prosecutors to their burden of proof.

Learn More About Us

Our Areas Of Practice

With extensive experience in all facets of criminal law, our practice involves all aspects of criminal defense work including defending those involved in state and federal matters, from initial investigations through appeals.

See Our Areas Of Practice

We have a proven record of success in both complex federal matters and state court cases across the country that has been recognized by peers and clients alike. These successes range from not guilty verdicts, dismal of charges, and lenient sentences.

Read About Our Results

Dedication makes the difference at The Law Offices of Vadim A. Glozman. Federal criminal charges must be taken seriously and addressed appropriately with the most proficient and skilled defense strategy available. Many people do not appreciate the significant differences between state and federal criminal matters.

In a few ways, these two items are alike. But in most ways, especially procedural matters, they are very different. Attorneys who approach state and federal criminal matters the same way usually struggle to obtain the best possible result under the circumstances.

Even after a sentence is served, the ongoing stigma and negative life implications can continue. A Chicago federal criminal defense lawyer can only erase these convictions from permanent records in limited situations.

Short-sighted lawyers only think about today and fail to recognize procedural differences until it is too late. But the visionary Chicago federal criminal defense lawyers at The Law Offices of Vadim A. Glozman never lose sight of the big picture. We are always mindful of the direct and collateral consequences of a federal criminal conviction, so we work hard to reduce or eliminate both of them.

At the same time, we pay close attention to details. In our experience, small details are often the difference between a guilty and not-guilty verdict at trial. Let us use this experience to help you and your family through a difficult time in life.

Laws change, but the principles behind these laws normally do not change. So, for many years, we have used basically the same approach in federal criminal defense matters.

We begin with a thorough review of your case as opposed to a cursory review of the facts. We pay close attention to the details present and take careful note of any details which are absent. In court, prosecutors must prove every element of the case, and not just some of the elements. This review helps us identify all possible defenses in a criminal matter. These defenses usually fit into one of three categories:

Identifying defenses is only part of the puzzle. The best defense on earth is useless unless a skilled Chicago federal criminal defense lawyer knows how to leverage that defense. At The Law Offices of Vadim A. Glozman, we have the requisite skills.

Over 95% of federal criminal cases settle out of court. These negotiations are not unlike poker games. You do not just play the hand you are dealt. You know what is needed to improve your hand, and you are mindful of the cards the other players are holding.

Of course, this analogy is incomplete. Attorneys have almost total control over plea negotiations. Furthermore, there is a lot more at stake than a few poker chips.

The high out-of-court settlement rate in federal court gives many attorneys a false sense of security. They assume the case will settle, so there is no need for thorough preparation. But at The Law Offices of Vadim A. Glozman, we always assume the case will go the distance, so we are always prepared to go to the mat for you.

Drug possession is one of the most common charges in federal criminal court. Authorities arrest over a million people a year for drug crimes, and almost 90% of these arrests are possession matters.

The Drug Enforcement Agency’s drug schedule is significantly different from the one that state authorities use. Marijuana is a good illustration. This substance is legal for most purposes under Illinois law. But the DEA classifies marijuana as a Schedule I drug, alongside heroin, LSD, and Ecstacy.

We also handle many white-collar crimes, mostly because authorities are very aggressive in terms of arrests and prosecutions in this area. Some examples include:

Many white-collar criminal matters have related civil proceedings, like forfeiture proceedings or tax audits. At The Law Offices of Vadim A. Glozman, we provide representation in these matters as well.

Every successful criminal defense begins with prompt jail release. Extended pretrial detention essentially removes the presumption of innocence and replaces it with a presumption of guilt.

Jail release in federal court is perhaps one of the biggest procedural differences between state and federal court. So, only an experienced Chicago federal criminal defense lawyer is able to start on the right foot. All these procedures vary significantly in different courts. Judges have a great deal of discretion to make their own rules.

State defendants usually have several jail release options. But a surety bond is usually the only alternative in a federal criminal case. Furthermore, only federal magistrates have the power to set bail in these cases. Some other restrictions apply as well. For example, most magistrates require a second Nebbia hearing to ensure that the surety is completely unrelated to any criminal activity.

Later, at the first appearance, the judge usually admonishes the defendant as to certain rights and addresses the matter of legal representation. The Federal Public Defender represents a few defendants based on financial need. But most defendants have the opportunity to partner with the Chicago federal criminal defense lawyer of their own choosing.

As the case moves forward, lawyers develop defenses, and settlement negotiations progress, defendants must usually choose between a plea bargain agreement and a trial. Plea agreements are subject to the Federal Sentencing Act. This additional oversight is another significant difference between state and federal criminal charges.

The trial could be in front of a jury or solely before the judge. Other options, such as a mini-trial and a slow plea, which is basically a combination of a plea and a jury trial, may be available as well.

When you work with the aggressive, strategic legal team at The Law Offices of Vadim A. Glozman, the objective is to always secure a not guilty verdict or complete dismissal of charges. If these things aren’t possible, we engineer the most advantageous plea deal. Throughout every step of the criminal defense process, we are focused on securing the most favorable outcome possible.

Federal or state criminal charges can be unnerving and frightening, but a number of successful resolutions are available. For a confidential consultation with an experienced federal criminal defense lawyer in Chicago, do not wait to contact The Law Offices of Vadim A. Glozman by calling 312-726-9015. We stand ready, willing, and able to put prosecutors to their burden of proof. Convenient payment plans are available.

When you only have one call to make, make sure it is the right one.

We are here to defend your rights!

HOW CAN WE HELP?

Some of our work has been highlighted by several of these publications. When a case receives pretrial media attention, it is necessary to hire an attorney who is comfortable and capable handling the sensitive nature of the representation. 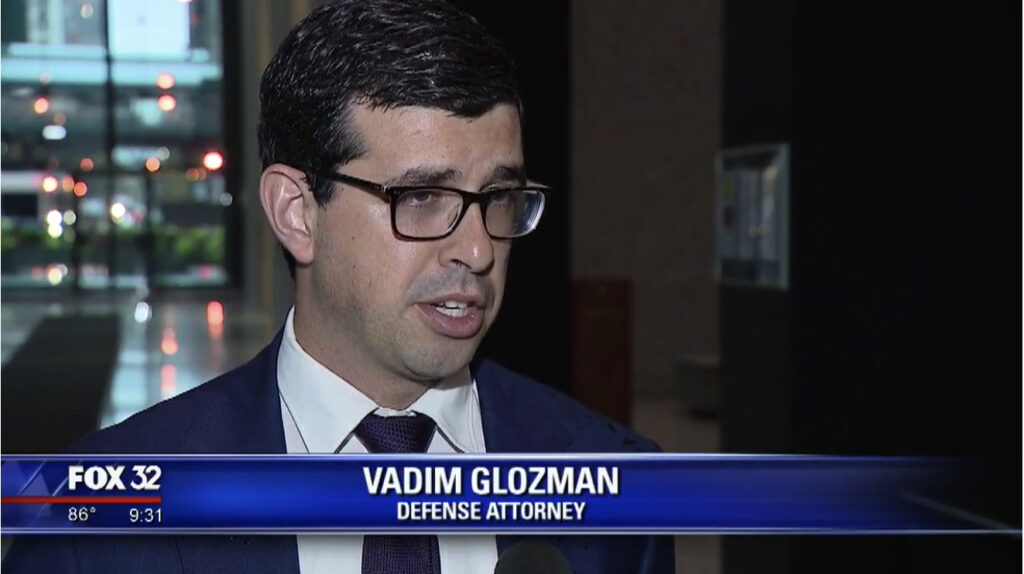